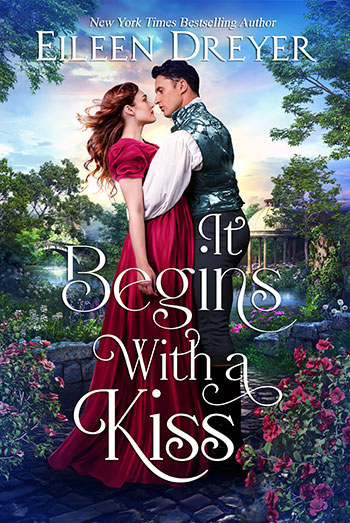 It Begins with a Kiss

Fiona Ferguson wants nothing more than to flee Miss Lavinia Chase’s Finishing School. Rather than the safe haven the girls’ families presume it to be, the school is intent on making its charges conform to the rules-by any means necessary. For Fiona, the only thing worse than staying at the dreaded “Last Chance Academy” would be abandoning the friends she’s made there. But when she receives word from home that her sister is in trouble, Fiona plots her escape . . .

A devoted spy in service to the Crown, Alex Knight takes his duties very seriously. His latest assignment-to ensure that the incorrigible Fiona remain safely at school-turns out to be far more of a challenge than he expected. After matching wits with the fiery Scottish beauty, he learns that the greatest danger of all . . . begins with a kiss.

She was incorrigible. That was what Miss Lavinia Chase of Miss Chase’s Finishing School in Weston said. It was what the curate said from All Hallows down the road. It was what the Charitable Gift Committee said, who traveled the few miles from Bath to oversee her education.

Of course, all of the girls at Miss Chance’s Finishing School in Bath were incorrigible. It was why they were there, at what was more vulgarly known as Last Chance Academy. But even in that pantheon of misbehaving, maladroit young women, Fiona Ferguson stood out.

She was always thinking. Not in matters of poise or etiquette, not even in the art of being agreeable. No, that would have at least done them all some good. It might have insured Miss Ferguson a place, however tenuous, in society. But Miss Ferguson preferred science over penmanship. Philosophy over etiquette. And, dear heavens preserve them all, mathematics over everything. Not simply numbering that could see a wife through her household accounts. Algebra. Geometry. Indecipherable equations made up of unrecognizable symbols that meant nothing to anyone but the chit herself. It was enough to give Miss Chase hives.

The girl wasn’t even saved by having any proper feminine skills. She could not tat or sing or draw. Her needlework was execrable, and her Italian miserable. In fact, her only skills were completely unacceptable, as no one wanted a wife who wanted to discuss physics, or who could bring down more pheasant than her husband.

Even worse than those failings, though, was the fact that Miss Fiona had a definite lack of humility. No matter how often she was birched or locked in her room or given psalms to copy out a hundred times, she couldn’t seem to drop her eyes, or bend her knee the appropriate depth. In fact, when her benefactors visited to inspect her progress, she looked them right in the eye and answered as if she had something to say besides “thank you for your benevolence to such an unworthy girl.”

Incorrigible. And if they could find her brother, they would deliver her back into his care.

But her brother, an officer with the Highland Brigades, was fighting somewhere on the continent, which meant they had no hands to deliver Fiona into if they showed her the door. Only her sister, but even the Charitable Trust knew better than to deliver any human into the care of Mairead Ferguson.

“It’s not that I don’t think Miss Ferguson doesn’t deserve to be left to that unnatural family of hers,” Lady Bivens sniffed at the board meeting to consider the latest crisis Miss Ferguson had fomented. “Plain, great gawk of girl. Why, she’d be nothing without us. Cleaning out pots or plying her trade at Covent Garden.”

Across the room Squire Peters snorted. “Not likely. Rather ride an actual horse.”

As usual, Peters was ignored. The rest of the board continued happily blackening Miss Fiona’s name until their carriages pulled up.

They wouldn’t do anything. They all knew it. Ian Ferguson might be poor as a church mouse, and he might have questionable antecedents, but Britain had made him an officer and a gentleman, and his timely rescue of the Duke of Wellington at the a place called Bussaco had made him famous. His sister was safe. For now.

Fiona Ferguson was safe because she was locked in the attic room where all misbehaving girls were sent to ruminate on their sins. After all, the board meeting had been called in response to her attempted flight from school with a groom from the local public stables. Fortunately, Miss Letrice Riordan had discovered the scheme in time and notify Miss Chase.

Fiona had said not a word when she’d been intercepted by the headmistress and John the footman on the back path leading to the mews behind Pierrepont Street. She hadn’t said a word all the way back in and up the four flights to her prison, or when they’d locked the door in her face. She had just stood there, white-faced and silent, as if they had been the ones in the wrong instead of her.

Not one person had asked why it was she had packed one small bag and run off, a crumpled letter in her hand. And not one person had thought to check on her throughout the long October night, to see if she was afraid or hungry. Miss Fiona Ferguson was in punishment, and that was enough.

To be honest, Fiona didn’t notice either. She lay atop a thin blanket on the narrow rope bed, fully clothed, staring at a water stain on the ceiling that over the years had taken the shape of Italy. But she wasn’t paying attention to that either. Fiona’s attention was on the paper she clenched in her right hand. The letter that had come to the Bath receiving office five days ago. It had taken her three days to sneak the money to the cook to claim it without Miss Chase finding out. It had taken a day to prepare her escape, and another three hours to be found out and dragged back.

She was still lying in the frigid room thinking of how to manage a more successful flight when she heard the scrape of a key in the lock.

Other Books in The Return of Drake's Rakes Series