Anticipation is Half the Fun 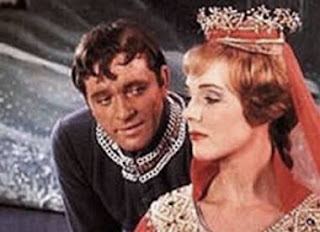 I think that’s pretty true of everything, from travel to Christmas. The reality is never quite as sharp and sparkly as it is in your expectation. Well, maybe once when I saw Richard Burton in Camelot. My friend Vicki called from Chicago to say Burton was going to be touring there in Camelot. He was in his 50s, and had lived a pretty hard life. But one of my items on my fantasy wish list was that I’d get the chance to see the original cast of Camelot; especially Richard Burton.

I drove five hours through thunderstorms to get there. I vividly remember spending the entire time cautioning myself: Don’t be disappointed. It won’t be what you hope for. But it’s still Richard Burton. You will be a cultural icon. You will have seen the Beatles live and Richard Burton in Camelot.

When the play finally started, I was so focused on not minding the dimmed and diminished Burton that it took me all of ten minutes to realize that, by God, he was brilliant. He was breathtaking. He was, as far as I was concerned, the only person on that stage. I have been very lucky to see some great theater, from Jerry Orbach to Ian McKellan to Vanessa Redgrave. Few of my experiences could come close to matching that afternoon watching Richard Burton.

But that doesn’t happen often. So I’ve learned to enjoy the anticipation as much as the trip. Not that every one of my trips hasn’t been wonderful. I’ve had rare and wonderful experiences. I’ve met fascinating people and shared wonders with my husband and friends. But just like anything else, during the planning stage, the possible is greater than the reality. I still have the chance to see everything I want, instead of having to settle for a museum because the rain is keeping us off a mountain, or missing the York races because your host is sick. But while it’s still in the future, you still have the chance of seeing and doing everything you hope to. That is the time the maps are magical and you know that this trip is going to be the best you ever took. It’s when, like Richard Burton in Camelot, the place you go will be even better than you’d hoped.