Pull Me A Pint 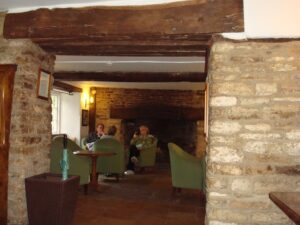 As I tootled along the back roads of England, I found myself obsessing over pubs. I photographed them, counted them, and wanted to sit in each and every one and have a drink. What is it about those places that draws me? It isn’t the drink. Believe it or not, I don’t drink beer in any incarnation, be it lager or bitter or porter (yes, I am a sore disappointment to my Irish family). And it’s a dead cinch that I can’t drive around for long if I’m downing gin and tonics all day. But I really want an excuse to get inside those old doors and sit down.

I can’t help it. Every time I go through a small town like Tetbury or Banbury, or Stow-in-the-Wold and see the white stucco or half-timbered front, the ale sign in the window, the name that evokes bygone eras, names like The George, the White Hart, the Bell Inn, and the tables out front in the sunshine, I have to stop. I order a gin and tonic just to have an excuse to sit either out under those umbrellas to watch the town pass by, or inside, where the chairs are worn, the floors flagstone, the walls half-timbered and the ceilings low.

It’s not a proper pub if the floors don’t list or the doors hang straight. An added bonus is a big, soot-stained fireplace, walls covered in framed black and white photos of the street out front over the years, and a bar that has been buffed by thousands of elbows. And then there is the name. The Merrymouth, the Royal Oak, the Kings Arm (do they really mean his arm? His gun? The branch of his government?For some reason it’s always Henry VIII on the sign) and my favorite of all, from Tetbury, the Snooty Fox.

I’ve decided that it isn’t the pub. I don’t simply want an excuse to drink in every town in England (I don’t even really drink the G&Ts. I just put them on the tables in front of me to give me a reason to be there). I think it’s the history. I was walking through Burford, a town that reeked of the sixteenth century. The buildings were constructed of the famous honey-colored Cotswold stone, set with mullioned windows and topped with steeply pitched roofs. What, I wondered, were the insides like? If I closed my eyes, could I feel the lives that had passed through the rooms? Could I hear the centuries of feet that had trod the floors, smell the dinners and woodfires? Would I sense the pain and joy and grief that had resonated within the walls? I don’t know. But I itch to see.

Well now, there’s the problem. Most people have more sense than to invite a perfect stranger into their living room just because she wants to breathe the same air their ancestors did. The pub, on the other hand, is delighted to see me step through its doors. Even better, as long as I’m not flinging tables–or other customers–around, I’m welcome to stay. Even more, I’ve found that most of the people who own or work in the pubs don’t need much encouragement to talk about the history of the place. So I don’t have to simply imagine the people who have passed through. I have names and dates.

I can sit quietly, not necessarily even talking to anyone, and imagine the Royal Mail coach pulling into the couryard, horses snorting and stomping as they’re being readied, women in long skirts and quaint bonnets being shown into back rooms for tea. I can see the farmers and shopkeepers gathered after a long day in the smoky taproom with their pints and their Wellington boots and their flat caps. I can feel the core of village life passing through these doors.

And since that is what I traveled to England to do, I don’t mind at all that I’ve missed seeing a National Trust property so I can sit in the pub down the road for another hour.