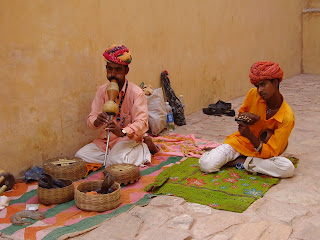 I’m always telling people how much I yearn for adventure. For new experiences. For travel to new and exotic places. Don’t get me wrong. I love St. Louis. I like being in the same city as my entire family. But it has long since been a widely acknowledged truth that I was born with the Irish wonderlust.

I was the one who seemed to be able to get out of my playpen at eighteen months with disconcerting regularity to show up across the street looking for cookies (my father never did figure out how I did it. No matter what he did, next time they turned around, two of the playpen bars would be lying on the ground, and the front door would be swinging shut). I remember discovering a storm culvert at the end of my block that stretched out into the woods behind the neighborhood and thinking how exciting it would be to follow it to the source, like a suburban Nile. To my huge disappointment, it went no farther than one street over where my cousins lived. I’d already been there. No adventure at all. (Although it did go through the woods, which still hold a strong memory for me as “The Place of Adventure.”)

To my greater chagrin, my mother had to come find me when she once again found me missing. She was not pleased. She let me know with the business end of a hair brush. I’m sure I scared the bejesus out of her. If her memory is correct, I was four.

It was difficult as a child. We had no money. We had a family of ten, including my grandfather, which meant that our vacation choices were two: floating down the rivers in Missouri (fun) and my aunt Janie and Uncle John’s cabin on the eastern shore of Lake Michigan), which turned out to be a magical place. The cabin is situated about fifty feet up off a private beach over the lake, and the cabin is separated from surrounding houses by dunes, so it was as if we were the only people around. We had the lake, which had stunning thunderstorms, we had the sand and woods, and we had the town, where massive tankers from exotic places pulled in with regularity (okay, so it was usually no more exotic than Detroit or Milwaukee. To a six-year old, that was exotic).

And yet, it was never enough. There was so much world out there, so many people to meet, so many foods to sample and historic routes to trace. There was so much to learn, and it wasn’t in St. Louis, where, when I was growing up, the only language heard was English, and the most exotic people were the students at Washington University. I needed more.

Happily, I married the perfect man. Not only does Rick understand that if we have twenty dollars set aside, it goes to the next trip. He doesn’t care that we’ll never move from the house we’ve been in for thirty years, or that we never quite joined that country club or had season tickets to anything.

Not only that, but he travels the same way I do. Not something you hear in the wedding vows, certainly, but something that should have been in mine. As I share our travels with you, you’ll understand what I mean. And how, if you are as lucky as I am to be able to see new places, you find someone who is happy staying in the same places, doing the same things, and eating the same foods.

I live by two mottos. From Auntie Mame, my mom’s favorite quote: “Life is a banquet and most poor fools are starving to death.” And, from somebody’s bumper sticker: “Life is short, but wide.” So I hope you’ll enjoy sharing my experiences with me. Even if you’re like one of our friends, who doesn’t really want to get on a train in Calcutta, but can’t wait to hear all about it from us. “We just got back from India,” we tell him. “And you had a great time.”

I hope you do, too. And if I can clarify anything, or tempt you into taking your own trip, or eating at any of the cool places I’ve gone (and no. I have not eaten eyeballs or grubs. Rick is another matter entirely), jump in. Because life is short. But it is very wide.