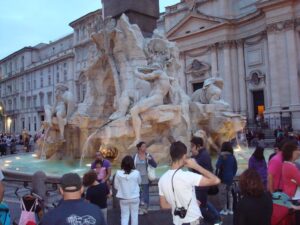 Everybody in America knows what old is. Old is before television. Old is before computers and microwaves. Really old involves either Pilgrims or Native Americans, who fought nature to tame a wild and often unforgiving land. That is old. We in America are infants.
I just spent three days in Rome. Yeah, I can see you now, shaking your head. Everybody knows about Rome. Crowded, noisy, filthy, rude, chock full of fanny-pinchers. Oh, there are some old buildings you can drive around in your car, but does it really matter? All I have to say is, Americans are infants.
It wasn’t just the Coliseum, which after the Taj Mahal is probably the most recognizable historic site on earth. It’s a bit moth-eaten, sure, but Russell Crowe fought gladiators there. But the Coliseum, although massive and amazing, isn’t even the most amazing ancient architecture in Rome. I give that award to the Pantheon, a simple round building built as a temple to the gods and found itself taken over by people who believed in only one of them. It is perfectly proportioned, elegant, deceptively simple, and still standing in the same glory with which it was made…two thousand years ago.
Yes, that’s what I said. The thing predates longbows, and still looks pristine. Absolutely amazing. Then there are the Roman fountains, which in and of themselves would be worth noting, especially the ones by Bernini, dancing explosions of marble that spout water from varied and amazing places to enchant, edify and nourish, since the water is perfect to drink. The water that is being forced through aqueducts the Romans constructed over…two thousand years ago. Nothing has changed. The wells the women got their water from have just developed fancy skins.
And then there are the catacombs. Now, for the purposes of fair reporting, the catacombs have been on my bucket list since I was a kid. You see, like any Catholic kid, I was raised on Lives of the Saints, which included every martyr known to the church, especially those who died particularly gruesome deaths. And many of those saints not only worshiped in the catacombs, they ended up there(not for eternity, though. When the market for relics got hot, the Church moved the saints to prevent further pilfering of fingerbones and skulls). The dark, close, musty subterranean vaults they used to inhabit, though, appealed to my dramatic little soul.
What I hadn’t counted on was the fact that these things really were so old. Yep. We’re talking two thousand year old range. The Romans mined the area for tuffa stone, leaving behind empty caverns, and the Christians (among others) used them for burial. I also hadn’t counted on the fact that when we got to go down there, those narrow, dark, cool passages would affect me the way they did. I swear you can feel the pain and hope and devotion resonating from those carved cavern walls, where little beds were carved from hard stone to hold someone’s wife or parent or child. I looked down the seven levels of tombs that had built up over the years (not many, though. They were finished in the late 500s. That’s five hundred. A.D. And those who passed through still seem to have form and spirit and weight) and found myself overwhelmed by the half million people who had been buried there. Did I mention it was two thousand years ago?
Kind of makes our “George Washington Slept Here” signs silly in comparison.