And Now, a Pause in Our Regularly Scheduled Programming 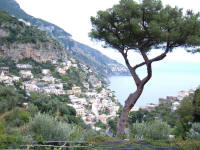 For the next three weeks, I’m going to be changing my blogging schedule, although it will serve much the same purpose. I’ll still talk about my writing life. But I’m going to be couching it in terms of the trip I’m on. I’m writing this from Matera Italy, where I’m attending the Women’s Fiction Festival. From here I’ll be traveling to the Amalfi Coast, Rome, Tuscany and Venice with my family in what I call the Flying American Tour. I want to at least touch each place so I know what it feels, smells and tastes like(Matera feels like sunlight, smells like fresh bread and cappuccino, and tastes like olives). My family wants to see as much as they can. So we compromise.
What I will also be doing will be scouting for my books. Just like Mel Gibson’s set decorator for Passion of the Christ did when he walked the streets of Matera’s Sassi district, I hope to find inspiration, confirmation and serendipity. I hope that the ideas that are gelling in my head for a story set in Italy just after the Napoleonic Wars will fine a setting, a voice and a score. It certainly worked in India. I found three characters and four stories there.
So here in Italy I will report on my success or failure in achieving at least the same. The fact that my search will entail sipping wine on a balcony over the Mediterranean, strolling medieval walled cities and gliding along the canals of Venice just means that I am the damnest, luckiest girl alive to have this job. It sure beats the hell out of fighting my way through ER hallways without spilling the pan of urine in my hands.
And if I may be pardoned for it, I will also do just a tiny bit of gloating over the fact that I was able to organize a champagne tour on a beer budget. Because besides being an author, I’m also Queen of Internet Travel. And I take both positions very seriously.
Ciao! Ciao!

One thought on “And Now, a Pause in Our Regularly Scheduled Programming”