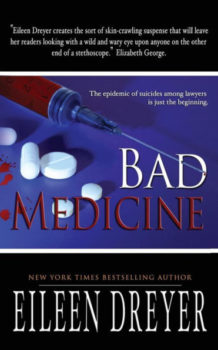 Trauma nurse and part-time death-investigator Molly Burke is having a pretty normal night at her St. Louis Emergency Department. Then a well-connected lawyer is wheeled in, victim of a suspected suicide.

One suicide is bad. But when one grows to four in a matter of days, and all the victims are lawyers, the trend stops being an oddity and becomes a real problem.

Were these really suicides? Why would successful, hot young lawyers want to kill themselves?

Then Molly unearths secrets that powerful people don’t want exposed and the puzzle suddenly becomes a threat. Now she must find killer, or become the next victim.

Originally published July 1995 in mass market paperback by HarperCollins and September 2012 in eBook by ePublishing Works!.

Nobody noticed that there was something wrong with the mayor’s press conference. It was a small thing, and the press was preoccupied with the breaking airline strike story at the airport, not to mention the ongoing investigation into morals charges against the Speaker of the House, on which most of them had sizeable bets. So they all slumped in the stifling room in the city hall waiting for Mayor Martell Williamson to announce who was finally going to be given the contract to open the casino on the St. Louis riverfront, and not one of them noticed who was missing.

The citizens of the St. Louis metropolitan area didn’t notice, even though they were being dished up the news live with lunch. Most St. Louisans found politics tiresome—especially city politics. It wasn’t even as if it was that important an announcement. During the two years the Board of Aldermen had carried on their public and often bitter debate over the contract, some thirty riverboats had already set up business on the nearby Missouri and Meramec rivers, which were much preferable places to park and wander than north St. Louis anyway.

Besides, it was hot out, and the people of St. Louis were far more interested in their weather than their politics. If they were even home to watch the news, instead of lurking half-submerged in one of the neighborhood pools to escape the humidity or at the stadium watching the Cardinals warm up against the Phillies, they were busy refilling their iced tea during the press conference so they wouldn’t miss Wally the Weatherman telling them just when they could expect a break from the two solid weeks of hundred degree weather.

Harry McGivers and Peg Ryan would have noticed.

Unfortunately they were already seated at the Missouri Athletic Club Grille about a mile away, celebrating the news with their favorite scotch and pharmaceutical chaser as they waited for the star of the story to return from the press conference and fill them in.

That was the problem. The star of the story wasn’t there. Up on Hodiamont Street where she lived with her mother, Pearl Johnson had the television turned to the news conference as she drifted off to sleep. Pearl was dressed in her best nightgown and robe, buttoned neatly to her chin, her hair brushed out, and her lipstick on. Her door was locked, and her Bible was at her side. Her pill bottles were lined up along her nightstand, and they were empty, each and every one of them.

Pearl knew what was wrong with the press conference. She was listening to her betrayal. But she wasn’t really paying attention. She was too busy dying.

“With her own unique blend of dark humor, complex motivations and riveting suspense, Eileen Dreyer is a very tough act to beat. Molly Burke is an extraordinary character whose life experiences have made her a woman performing a delicate balancing act with mental and emotional stability. A nerve-shattering suspense.” 4 ½ Stars Gold Medal, RT Magazine

Other Books in Speaker for the Dead Series