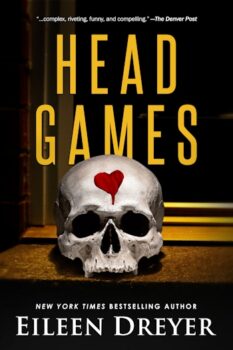 She’s seen it all, until…Head Games, a Medical Thriller from Eileen Dreyer

St. Louis death investigator and trauma nurse Molly Burke has seen just about everything, until gifts begin showing up on her doorstep—gifts like human eyes and painted bones—the signature of a twisted serial killer.

Complicating the dangerous situation, Molly’s 16-year-old nephew unexpectedly shows up on her doorstep, with problems of his own.

Now, Molly must balance the investigation into the mind of a monster, who’s taking her back to the worst years of her life, while launching a rescue mission for her nephew. The question is, will she survive either?

There is comfort in ritual.

There is the security of knowing that our most precious needs and urges can be protected simply by enclosing them within the high, strong walls of familiarity and precision.

Kenny understood this. He understood ritual. He recognized the need for it, the joy of it. He cherished the keen anticipation of each deliberate act. Kenny practiced his rituals as carefully as a priest performs high mass.

One of the keystones of Kenny’s ritual was the ten o’clock news. Kenny watched the news the way other people read obituaries. Once he knew his name wasn’t going to be mentioned, he could get on with planning the next day’s work.

But not just the ten o’clock news. The ten o’clock news on channel seven. Kenny preferred to get his news from channel seven, because it tended to carry the most lurid stories. Kenny liked to hear the breathless outrage in anchorwoman Donna Kirkland’s soft voice when she said words like startling and gruesome, almost as if she derived sexual pleasure from them. He liked the way her plump little lips wrapped around the vowels and her eyes widened at the words.
but that wasn’t something he figured he should dwell on when he had his new friend with him, as he did tonight.

Flower. Her name was Flower. It was such a wonderful name, Kenny thought, turning to her.

“Ten o’clock is the only time to watch news,” he said as he settled himself back down on the nubby brown plaid couch and wrapped his arm around her shoulder. “By now, anything that’s going to happen has happened. No big surprises, ya know?”

So he smiled. He had his beer, Flower was here with him, and there was murder on television. And to make it all perfect, Donnatheanchor–Kenny always thought of her as that: Donnatheanchor, as if it were her entire name–was excited by it.

“…two park rangers found the partially clothed body of a woman in the woods while clearing brush.”

On the TV the camera panned over the obligatory stand of dead trees silhouetted against a gray sky. Caught clustered in a fold of land like cattle sheltering against the wind stood about a half dozen uniformed officers bent almost double, an ambulance cart, and a couple of fat guys in down vests and baseball caps.
“Now they’ll get the official report from the homicide officer,” Kenny said with some disgust. “You’d think they’d change the format just a little.”

“Jamie?” Donnatheanchor called out to the reporter. “Have there been any official statements?”

A slick twentysomething guy showed up, standing in front of the downtown police station. “Well, Donna,” he said, frowning,  “identification has not been made. We spoke with a representative of the medical examiner’s office a  few minutes ago.”

The TV now showed the inside of some generic government office. A woman stood quietly listening to a question being asked off camera. Kenny saw her and forgot all about the homicide officer he’d expected. He forgot the story entirely.

His heart suddenly raced. He felt the surprise right there in his throat. Squinting, he leaned closer. He opened his mouth to say something and then didn’t remember to say it. He thought, maybe he’d stopped breathing.

“My God,” he whispered, stunned.

Older, much older, it seemed to Kenny. But then, so was he.

“My God,” he breathed again, shaking his head. “It’s her. Why didn’t I know?”
“The medical examiner believes the victim to have been at the site for about four days,” she was saying, not smiling at all now. “We won’t know the cause of death until the autopsy has been performed in the morning.”

Kenny always remembered her smiling. But he remembered this look even better. Her sad look. Kenny remembered her looking at him this way, like she wanted to say something or do something that could make it all different.

Maybe that was why he suddenly recognized her. He’d finally seen her sad look. The look he’d always thought was all his.

“Molly Burke is a death investigator for the city of St. Louis,” Jamie the reporter said as he appeared again on the screen.

He turned to Flower then, truly thrilled. “You don’t understand,” he said. “I knew her. I know her. I wondered for so long what’s become of her, and now to realize that she’s been right here, that I’ve seen her! I wasn’t sure…I mean, you hope, ya know…but…well, I’ve just got to let her know I’m back.”

Kenny turned to the TV, but he was too late. Donnatheanchor had moved on to recap the top news story, which charted the various government agencies that were temporarily shut down in the wake of the latest congressional budget deadlock. Molly was gone and wouldn’t come back. But Kenny knew where she was, and he knew just what to do about it.
For a few moments, he just sat there alongside Flower and considered his good luck. Kenny had never been the kind of person who had good luck. And even on the rare occasions he did get it, usually he didn’t know what to do with it.

Well, he knew this time. He knew because for twenty years he’d been anticipating what he’d do if this very moment ever came. He’d been practicing hard in his head so that it would be perfect.

Twenty long years. And now he would finally get to act out his most precious dreams.

Tilting the long-neck Busch up to finish it, he set the bottle down and stood up.

“Time for lights out,” he said to Flower. “I’m going to have a busy day tomorrow.”

His friend Flower smiled back. But then, she always smiled. So Kenny smiled at her, because tonight he was happy, too. Then, with the exquisite care he showed all his friends, he lifted her head off her shoulders and put it back in the refrigerator where it belonged. Then, turning off the lights, he went to bed.

Other Books in Speaker for the Dead Series