Eating My Way Around Italy 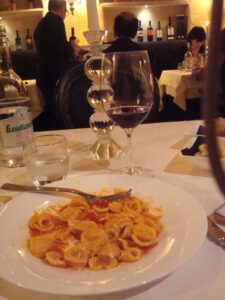 Too often eating is a chore. I’m not one of those people who considers food fuel. I consider it art, inspiration, passion. It is, at its best, a sensual marriage of sight, scent and taste. I don’t eat bread. First I inhale its scent—ah, wheat, rye, honey, maybe asiago cheese–(you can imagine how delighted my children are to eat with me in public). I nibble, like a mouse, hoping to stretctch out the experience as long as I possibly can (I learned that from living in a big family where you got one—count it one—helping and no more. So hurrying did you no good). Like a mouse, I nibble, just to make the experience last longer (another reason my chidlren just love to eat out with me). But sadly, most days it’s impossible to dig up any enthusiasm for the fare. After all, it’s one thing to go into raptures over Chateaubriand. It’s quite another over cereal and yoghurt.
Which brings me to one of the reasons I’ve been counting down to Italy. I can’t think of anyplace else in the world a meal is such a symphony. The French think that they rule with their sauces you can’t pronounce that take three days to make and five minutes to eat. But for me, I’ll take fresh pasta, a glass of red wine and the sun warming my shoulders as church bells chime the hours.
I always put recommendations on my website for any restaurant I’ve enjoyed. I may have to start an entirely new website for Italy. The truth of the matter is, I have never had a bad meal. I know they’re possible. I read it all the time on Trip Advisor. But I’ve been lucky.
I wonder if it’s because from the minute I sit down the waiter realizes that while I’m not an expert, I am certainly a devoted fan. For instance, I supped at Il Bottole in Matera. I ate alone. At first the waiter was a bit hesitant. But when he poured my wine (a Primitivo from Matera) (didn’t I say that like I knew what I was talking about?) he saw that I approach wine like any other food. As if I’m courting it. Approach coyly, hold gently, savor with eyes closed the surprise, the delight, the mystery of its make-up. It doesn’t have to be complex. It certainly doesn’t have to be expensive. All I ask is that the chef is as delighted by his own work as I am.
So the waiter sees me light up like a saint hearing heavenly choirs, and he smiles. And it’s a special smile, not one of those “I’ll put up with her because it’s my livelihood” smiles, but a smile of companionship, of superiority that we two can recognize beauty.
He asked if he could order for me. To me, a great compliment which I gladly accepted. After all, I know what the best regional food of St.Louis is (toasted ravioli and Ted Drewes’s frozen custard), but I want to know what he feels proprietary toward in Matera.
Well, he had good taste. Of course I’m not organized enough to remember to write down names, but the first course was two offerings, a small tart of ricotta cheese and vegetables (and to tell you how much I loved it, I HATE carrots. Not in this), and aa variation on bruschetta with (I can’t make this up) charred char, tomatoes and shaved ricotta. Enough to make saints weep.
My second course was a breaded cod cooked in olive oil with potatoes, olives and tomatoes. Yes, thank you. It was that good. I barely refrained from tilting the plate straight down my throat. Add to that the smooth complexion of that Primitivo wine, and I was having my version of holy communion (wow, can I hear my mom’s voice chastising me for that one).
Even the Italian version of fast food, a cafe Americano and zucchini quiche seems to be more exotic, more flavorful, more satisfying. Maybe it’s the sunlight. Maybe it’s being away from my normal staple of sandwiches and salads. I’m not sure. All I know is thank heavens Italy is all uphill, or I’d never fit into my clothes again. Although it would certainly be in a worthy cause.
Now that I’ve become familiar with Matera, though, I need to find out whether the Amalfi cuisine measures up. Or if the Roman cuisine can compare. I hope you dont’ mind following along. I promise I’ll try and make it as palatable as I can (which, in Italy, really isn’t that tough to do).