In Praise of Big Bus Tours 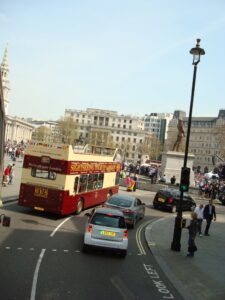 Now, as anybody knows who either knows me or has been reading my travel blogs, I am not the kind of person who usually joins tours. I’m too impatient, and too impulsive. If I want to stop to take a picture(and I do. Often), I want to stop. Then and there. Not so possible on a bus tour. I also want the pictures that nobody else gets. Also tough to do when you only stop where all the other buses stop, for as long as they stop, and wander about with the thirty other people on your bus. And I want to go the places other people just don’t go so much. You see my theme here.

As I have also said, bus tours are wonderful for the people who enjoy the safety and comfort of having somebody in charge who knows the country, who like making friends with the other people on the tour and sharing the discoveries with their new friends. Or, for people who simply want to get a good overview of a place so they know what it is they want to visit when they return. Which is where we come to the one bus tour I take every time I travel to a new city.

I take the city tour bus. In London it’s called the Big Bus Tour. I’ve been to London four times, now, and I’ve hopped on Big Bus every time. First of all, because it does give you a great overview of the city. Second, because it’s the easiest way to get around to where you’re going to go anyway. Easier than reading the local bus schedule anyway(although I’m pretty darned good on the Metro/Underground/Subway, whatever you want to call it—a brilliant way to get around any city).

Anyway. If it’s a doubledecker bus, I’m the first one on the top, where I can see the architecture unimpeded, and get the overall feeling of the area we’re driving through(is it bustling? Quieter? Noisy? Full of historic buildings or 20th century behemoths? Narrow streets or boulevards? Dripping green or burdened with concrete?). Atop a bus is the best place to find out, especially when you have a friendly driver and guide to correct mistakes or offer extra tidbits.

Even better, you can get on and off at will. Oh, they have set stops, but in most cities they’re very well placed so you can walk all you want and catch a later bus back where you’re going. On this trip to London, I picked the bus up at Victoria Station, hopped off at Green Park so I could walk the streets of Mayfair and St. James, got back on the bus at Green Park, road around to Buckingham Palace and walked through the special art exhibit on Victoria and Albert(btw, he was gorgeous. He had eyes that pierced right through you. Her? I just wish somebody had told her the empire wouldn’t fall if she’d smiled). Anyway, back on the bus, then over to Lambeth Palace where the Bishop of Canterbury lives and has the offices that dispense the famed special licenses for marriage. 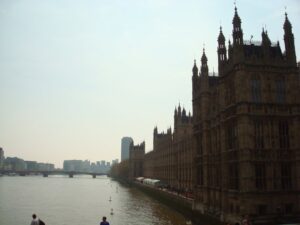 On the bus, off the bus, as much as I wanted, with a final complete circuit so I could set the placement of each site firmly in my head. Oh, I love to walk the streets of London and Dublin, and fell madly in love with Prague. But I like knowing that if my knees give out, I have a way home.

Oh, and my secret delight about the buses? There is just something voyeuristic about sitting above all the rest of the city, where you can look down on people. Because people tend to protect themselves from being watched from the ground level. But they never think that somebody’s looking down on them, and you get to see them at their truest. Sneaking kisses and straightening clothes, cursing a cab that came too close to a puddle or swinging a child in the arms. Laughter and tears and furtive glances, and I get to see them all.

So next time you’re in a new city, if they have one of those ‘hop-on-hop-off’ tours, give it a try. At the worst, it’s a $20 ride around the city. Sure cheaper than cab fare.

One thought on “In Praise of Big Bus Tours”