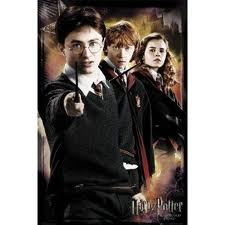 I hope J.K. Rowling makes more money than God. Not just because I thought the Harry Potter series was seriously brilliant, beautifully innovative and clever as hell. Because J.K. Rowling seduced generations of kids into reading.

I admit. I came to Harry late. But then, my kids were already grown when he showed up. I didn’t have anybody to take to the midnight parties or warn that if they didn’t get their homework done, they couldn’t read the next installment before their friends. I couldn’t imagine what could cause such passion.
As I finally read the series though (in a two week period), I felt cheated, because I didn’t have kids to discuss it with. Because it isn’t enough to read the series, to root for Harry and Hermione and Ron, to hiss at Snape and the Malvoys, to wonder at the magic of Dumbledore, you felt compelled to discuss it, argue over it.
J.K. didn’t just write an adventure story with kids, it’s a guidebook for kids in how to live their lives. As I said to my cousin when she objected on the grounds that Harry is a wizard and must be evil, Harry Potter is yet another retelling of the Christ story. It can’t be more obvious. And along the way, he teaches strong lessons on the power of love, honor, loyalty and faith. And, my favorite, that the power of a mother’s love is stronger than any other force in either world.
I did lasso my grown kids and make them talk to me about the series. I’m going back in the next few weeks after my deadline and rereading the series again. And I’ve discussed with other authors at length the respect I have for Rowlings’s work. I got to the end of that sixth book and couldn’t imagine how she was going to pull it off. As an author and student of mythology, I knew exactly what she had to do. I just couldn’t figure out how she was going to do it. I tip my cap. She did it beautifully.
But as an author who has been hearing dire predictions about the future of literature, I want to give money to J.K., because she hasn’t just enticed kids to read books, she’s enticed them to read good books. Books that teach. Books that open their imaginations and expand the world. I was in the coffee shop today and got into a conversation with a girl who was deep into the Rick Riordan series about Percy Jackson. She was enthusing about the ancient gods, which she knew about because that is the world of Percy Jackson. I’ve met a lot of other kids who went from Harry Potter to Frodo Baggins, who graduated from the wizarding world to the Mars of Bradbury, the earth of Isaac Asimov.
When my kids passed through those all-important years when reading is ingrained on a person’s habits, they only had RL Stine and Fear Street. Exactly where do you go from there? It took my daughter ten years to find her way back to reading. If Harry had been there, I contend she never would have taken breath. I think of the great books she missed, and it makes me sad.
So, thank you, J.K. If we ever meet, I’ll stand you to a drink. Because I contend that without you the future would have looked a lot more dim.