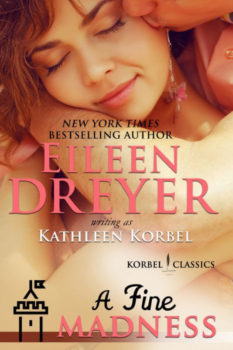 Quinn Rutledge has been hired to remodel historic Hartley Hall into a 5-star hotel.

Ian Matthews, a Special Forces officer in the Queen’s Protection service, is vetting the hall’s security for a secret international meeting, and presents himself to Quinn as a corporate officer checking on her progress.

All seems simple enough, until the pair uncover a crazed band of terrorists, a destructive ghost with an odd sense of humor, and an inconvenient attraction to each other.

Neither have time for love, and Ian is the embodiment of everything that went wrong with Quinn’s first marriage. But Love doesn’t care.

Ian’s shadow fell over her. Quinn wasn’t surprised. That faint wood smoke had preceded him, mixing with the fresh smell of shavings from the very old wood. For some reason, Quinn’s hands were damp where they held the hinge and screwdriver. She couldn’t quite line either up properly.

“What did the chapel look like before?” he asked.

Quinn couldn’t help glancing up, her head tilting instinctively. “Like this.”

Ian took another considering look. “Even the windows?”

Quinn gazed up at the sharp blues and blood-reds of the medieval windows high over her head.

“We found them in the priest hole,” she said, her eyes and voice softening. “In perfect condition. Evidently they couldn’t bear to sell them. They were Mary’s favorites.”

Ian leaned his elbows on the scrolled pulpit and leveled surprised eyes on Quinn. “You like her.”

Quinn met his gaze, her hands quiet against the warm wood in her lap. “I sympathize with her. This is her home, and her family kept selling it off and changing it on her.” Quinn shrugged. “They disappointed her.”

Ian’s eyebrow did that little dance again, this time betraying suppressed humor. “She told you that?”

Quinn’s scowl would have sent half her workmen scurrying for cover. “It seems to me I wasn’t the one on his face in the carpeting just a while ago, Mr. Matthews.”

“I’ve just never seen anyone so conversant with a ghost before—at least not unless that person was sitting in a tent wearing a turban and several yards of necklace.”

Quinn scowled. “No wonder she slammed the door on you. I’d be careful of wandering off alone, if I were you.”

Quinn turned back to the simple altar that took up one end of the room. A block of Cornish stone, gray and smooth and dark with the fervor of centuries, it stood solid against the bouquet of color from the St. George and St. Patrick window behind it.

“I understand there’s a priest hole?”

She pointed to the corner. “Tucked in over there.”

Stepping up, Quinn slid her hand along the paneling next to the altar until she felt a recession. She pushed and the wall groaned. Shifting her weight, she leaned one shoulder into the section until the wall cracked. The smell of damp and mold snaked out on a thin draft.

“How do we see?” he asked. “Burning torches dipped in pitch? Tallow candles?”

With a grumble and a squeal, the door finally obliged. Quinn reached around to her left and hit the switch. “Fluorescent bulbs.”

Immediately the shadows melted from the stone steps that marched in a straight succession along the north wall toward the second story and the old earl’s bedroom.

“How safe,” Quinn retorted, leading the way. “A necessary consideration when one is inviting paying guests to tour one’s house.”

He followed at a syncopated pace. “We don’t have to let them up here.”

His words echoed off the smooth stone. Far above them the priest hole was still shrouded and secret.

“But this is one of the main attractions,” Quinn said. “A real priest hole.”

“Difficult to do. But there isn’t anything I can do to make her any safer.”

“You could exorcise her.”

“Throw her out of her own house?” Quinn demanded, outraged. “Your manners are atrocious.”

They’d reached the halfway point, the walls close on either side, the priest hole still invisible, the light from the chapel a faint wash alongside the glare of electricity. So, of course, that was when Mary chose to strike.

First the lights went off. Quinn instinctively stopped, the way up suddenly a frightening void. She whirled for escape, but it was too late. Just as Ian bumped into her from the step below, the door to the chapel slammed shut with a resounding thud.

“Oh, no,” Quinn muttered, breaking out into a sweat. “Why take it out on me?”

Her answer was a raucous laugh that echoed up and down the steps like thunder over a river.

She felt Ian stiffen to a stop just below her, bringing their heads to the same level. “I don’t suppose that’s you being so amused,” he ventured in a wonderfully controlled voice.

Quinn envied him his nonchalance. “I have a feeling you’ve just insulted Mary again.”

“I apologize most humbly, your ladyship,” he called, and the echo of his voice mingled with Mary’s.

The lights failed to revive.

“I don’t think she accepts,” Quinn said. She turned around and reached for the walls on either side. Took several slow, deep breaths, desperate for orientation in the sudden blackness. When she found the walls, she tried to ease her bottom down on the stair just above her. The problem was that in the total dark, she was beset by the overwhelming suspicion that the stair had disappeared, leaving a terrible nothing so that she’d sit down and just keep tumbling into space. Quinn hated the dark. She hated close places. Until now, it had been her secret.

She had an awful feeling she was about to give herself away.

“Shouldn’t we go on up?” Ian asked patiently. Quinn could feel the brush of his voice against her, could smell him again in the dark like a premonition. Vivid in the musty blackness, so that she was tempted to reach for him for stability.

“I imagine so,” she answered, eyes shut, eyes open. No difference. Just Ian close enough to kiss in the middle of nothing.

“You want to go on up?” she tried, furious to hear her voice quaver.

There was a brief pause. Ian mustering his tact, she was sure.

“Are you all right?” he asked and laid a wonderfully callused hand on her arm. Stabilizing, settling, soothing.

Quinn vacillated between wanting to throw herself into his arms and push him away.

“I’m fine,” she managed, blinking away quick tears of frustration. “You’ve just found out why I felt it necessary to put lights along the stairway.”

Again, a heartbeat of silence. Then Ian’s voice, close, gentle. “Walk on up with me,” he coaxed, gently pulling her arm away from the wall.

It was, in the most euphemistic of terms, a tight squeeze, but Ian managed to change places with Quinn. She had to admit that there was something wonderfully reassuring about the slow steady throb of another heart pressed against her chest in that darkness. She didn’t even mind that Ian seemed to find it necessary to brush his knuckles gently across her cheek on the way by.

But then he was a step up, and his hand guided her into the darkness. Quinn tested the way with hesitant steps.

“There you are,” he crooned with that rich accent of his, a hand under her arm as he climbed ahead of her. “We’ll be up in no time, and then we’ll lean out the windows of the earl’s bedroom and look at the ocean.”

“And get sick in the flower beds,” Quinn retorted.

Her voice tumbled down the stairs like water, disappearing into the darkness and stealing her feeling of stability.

Quinn wedged herself between Ian and the wall, terrified by the prospect of stepping off into space. “Should be here.”

She found the indentation and pulled at it, just as she had at least a dozen times before. And of course nothing happened. Quinn’s failure was met by another round of echoing chuckles.

Quinn gave the door another impotent tug. It landed her right back against Ian’s chest. He instinctively wrapped an arm around her waist to keep her from overbalancing. Quinn leaned into him, his sinewy strength easing her sense of disorientation.

“Then let’s suck our thumbs.”

“It’s much better than crawling into a fetal position and sobbing.”

Half an hour of pounding and yelling changed nothing. Ian was very afraid they would be stuck in here for the duration. And considering the rasp to Quinn’s breathing and the fine tremor in her hands, he was afraid she wasn’t enjoying the dark nearly as much as he was.

She was so bloody sharp. So bright. She felt so vulnerable curled up in his arms, her head resting against the hollow of his shoulder so that the whisper of sandalwood kept tormenting him.

“I can’t breathe,” she rasped, ducking her head more deeply against his chest. “There isn’t any room.”

“They’ll be along soon,” he promised again, that litany a much too familiar one. “Tell me about Ottumwa.”

“No… I can’t think… I want to…” She lifted her head, so that Ian could almost almost see the liquid terror in those eloquent eyes. “Oh, God,” she whispered, her hands in his, her voice tattered. “I’m trying so hard.”

Ian meant to say something. He meant to comfort her, to cheer her on. But in the darkness, he was overwhelmed, too. By the warmth of her, the scent of her, the husky desperation in her voice. Letting go of her hand, he cupped her face in his palm, feeling the damp skin, the fresh splash of tears. And because he suddenly couldn’t think, either, he bent to kiss her.

Ian had no proper warning that they were about to be rescued. The door into the earl’s bedroom didn’t even squeak as it swung open. One minute there was that total, impenetrable blackness. The next, a blistering shaft of light blinded him. There was no mistaking the military bearing of the silhouette dead center in the doorway, though.

“Oh, I say,” the colonel apologized immediately. “I didn’t mean to interfere.”

And just as quickly, he shut the door again.