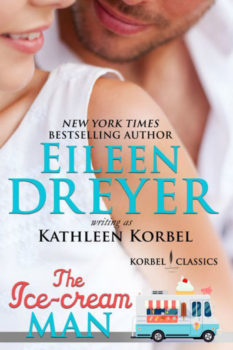 Nick fears Jenny is more than the frazzled mom of two she portrays, as all evidence makes her suspect number one in his check-kiting case.

Of course, Nick also knows a cop should never fall in love with his suspect. And a man who can’t tolerate kids shouldn’t love a woman who wants a houseful. But somehow he keeps forgetting as he does everything possible to prove the evidence wrong.

No full-grown woman with two children had any business falling in love with the ice cream man. As she waited out on the sweltering street, her hand in that of her tiny daughter’s, Jenny Lake kept reminding herself of that. She was a responsible adult. Responsible adults did not drool over good physiques.

The longer she stood out under a July sun in a line of giggling, preening teenage girls, though, the less she seemed to care. For some reason, in this summer of her thirtieth year, when she never seemed able to concentrate beyond the next bill, the next crisis or the newest flood of tears, Jenny was suddenly struck by a whimsy she couldn’t explain. She found herself mesmerized by a good set of buns and a tattoo.

Well, she had to admit with a secret smile as she lifted damp black hair from her neck, it was more than just that.

“What can I get for you?” he asked, leveling the most mesmerizing set of whiskey-brown eyes she’d ever seen on her.

Jenny just stared. All she could think of was the movie Picnic. The dangerous, mysterious man coming to town. If the William Holden had looked anything like this guy, she would have been just as foolish as the heroine.

Jenny had to grin. “Thanks, Em. I’ll do better next time.” She allowed one last errant thought to pass before getting down to business; she wondered once again whether fairies had, indeed, changed her three-and-a-half-year-old baby girl for a forty-year-old midget from the royal family. There should be some law against a child being more composed than her mother.

“What about Kevin?” Emma piped up with a tug on Jenny’s hand.

“Three,” Jenny immediately amended. She’d be hearing about this for hours.

“Two-twenty-five,” the man answered, already bent over his freezer.

He didn’t belong here, Jenny thought suddenly. He didn’t look right. It wasn’t the white T-shirt and low-slung jeans. Those fit. They fit too well, for several uncomfortably obvious reasons. So did the anchor and snake on his arm, wrapped around the blue Semper Fi proclamation. Even the way he’d pulled his dark brown hair back into a short tail made him look suspect, slightly shady. His face was angular, dark, with those hot, liquid eyes that bored holes through a person’s best reserve. But it wasn’t that.

Jenny thought about it as she dug into her own shorts for the change and handed it over. Maybe it was the fact that his face, for all its youth, looked too experienced. She had trouble believing he was on the shy side of thirty. And his eyes, for all their steely indifference, looked too intelligent. Maybe it was the silly fact that he didn’t smell like a man who would abdicate his future to a bell and a white truck.

For all his casual disregard for appearance, he was just a little too carefully put together.

Dumb reasons, for sure. Certainly nothing even the eminently practical Emma would consider. But one thing Jenny was beginning to realize as she found herself staring now at the long, graceful fingers that were lifting bombpops out to her, was that for some reason when it came to this particular ice cream man, common sense was failing her.

Then he smiled, a grudging flash of warmth that transformed the truculence into shy sincerity, and Jenny was snagged for good.