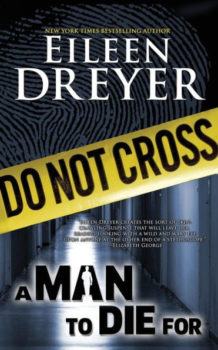 A Man to Die For

St. Louis Trauma nurse Casey McDonough thinks her life is interesting enough. Her best friend still drops acid, her ex-husband is a cross-dressing psychiatrist, and her mother has turned the third floor of the family home into the Chapel of Eternal Vigilance.

Then, things begin to really go wrong when OB/Gyn Dr. Dale Hunsacker arrives. Handsome, wealthy and charismatic, the good doctor is enchanting the patients of the St. Louis hospital. But, Cassy believes he is a serial killer. And the only person who takes her seriously, is Hunsacker himself.

Caught in a spiral of suspicion and intimidation, Casey approaches ex-Marine, ex-Jesuit homicide sergeant Jack Scanlan for help. All she has are hunches for proof, but she’ll do anything to stop the monster walking the halls of her hospital.

Originally published July 1991 in mass market paperback by HarperTorch and July 2012 in eBook by ePublishing Works!.

Control your impulses, her mother had always said. Stifle your urges, the church agreed. She should have listened. The next time she had an urge like this one, she was going to lock herself in a closet until it went away.

“I have to make a stop before I take you home, Mom.”

A stop. She had to report a crime. Several crimes. That wasn’t exactly a run to the local Safeway for deodorant.

Gripping her purse in one hand and her mother in the other, Casey McDonough approached the St. Louis City Police Headquarters like a penitent approaching the gates of purgatory. It seemed amazing, really. Casey had been born no more than fifteen miles away, but she’d never visited this place before. She’d never even known precisely where it was.

A stark block of granite that took up the corner of Clark and Tucker, the headquarters did nothing to inspire comfort. Brass grillwork protected massive front doors and encased the traditional globe lamps that flanked it. Unmarked police cars and crime scene vans hugged the curb. Police in uniform or windbreakers and walkie-talkies hovered near the front door, chatting among themselves. Civilians edged by, sensing their own intrusion, much the way they would enter her hospital.

Casey didn’t want to be here. If she could have, she would have approached her friends on the county police force instead. She would have pulled one of them aside when they’d come into her emergency room and proposed her theory in a way that could be considered an inside joke instead of an accusation.
“Say, Bert, what would you think if I said there’s something just a little more sinister than fee-splitting going on around here? What if I told you that some of the bad luck around this place is actually connected? And not just because I know all the people involved, either.” Bert would laugh and deflect her fears with common sense, and the issue would have gone no further.

Only none of the crimes Casey suspected had actually happened in the county. Bert wouldn’t know anything about them. He couldn’t do her any good. If she wanted any relief from the suspicions that had been building over the last few weeks like a bad case of indigestion, she was going to have to find it with the city cops. Cops she didn’t know. Cops who didn’t know her.

Casey pulled on the heavy glass-and-brass door and winced at its screech of protest. It sounded as if it resented her intrusion. The way everybody else ignored the noise, the door must have been objecting for years.

Inside, the foyer was a high square of marble, cool and hushed. Casey held the heavy door open for her mother to follow inside. Sketching a quick sign of the cross, the little woman instinctively reached for a holy water font.

“It’s not a church,” Casey reminded her.

It was hell. She was in hell for what she suspected. But Casey just couldn’t keep it to herself any longer. It was time to let somebody else help shoulder the weight of this rock she was carrying around her neck.

“What do you mean it’s not a church?” her mother asked, swinging around on the gray marble floor, her voice echoing in the cavernous lobby. “Who’s going to take care of St. Joseph?”

Heads turned. The female officer at the control desk at the far side of the room came to a kind of careful alert, like a guard dog catching an unfamiliar scent. Two middle-aged black men slouching against the wall of the diarrhea brown and green waiting area interrupted their conversation to assess the new entertainment.

“It’s a police station,” Casey whispered, a hand on her mother’s arm so she couldn’t get far. “It’ll only take a minute.”

She shouldn’t be thinking of her civic duty. She should be thinking of her personal duty. She had a mother to take care of. A mother nobody else really wanted to be saddled with. What was going to happen to Helen when Casey was without a job, without a career, without any kind of future? Because if she took another step, that was exactly what was going to happen. This simply wasn’t the kind of action the medical hierarchy overlooked.

This was stupid. She had no business being here.

She had no choice. Evelyn had been her friend. Casey stepped up to the desk.

“Couldn’t I just go to confession?” Helen asked in a little whimper. “I only pruned her roses.”

The officer frowned. A petite, precise black woman with very little humor in her expression, she considered Casey’s mother like a bad joke. Casey couldn’t blame her. But then, Casey didn’t know that the sergeant was going to like Casey’s story any better.

How did she say it? How did she pull all the suspicions whirling around into some kind of recognizable order? How did she accuse a respected man of crimes without suffering recrimination?

Crimes. A euphemism. A generality that didn’t carry the impact of the truth. She’d been avoiding the issue by calling it a crime, instead of what it was. She’d been dancing with inevitability, because the minute she gave voice to the suspicions that had been hovering like unwelcome ghosts, there wouldn’t be any retreat. There wouldn’t be any chance of calling her fears a mistake.

“Have you ever thought of the convent?” Helen asked, reaching across the dark wood desk. The officer flinched.

Casey pulled Helen back just in time. “Say a rosary, Mom.” When Helen nodded agreeably and began to dig into her purse, Casey returned to the officer. “It’s about the murder the other night, Crystal Johnson. I may have some information about it.”

That elicited a long, considering look. “You wanna tell me?”

Casey didn’t know whether she wanted to laugh or cry. Didn’t this woman understand how tough this was?

“It’s a long story,” she hedged miserably. And somebody’s going to see me here, somebody from the hospital like me who never comes into the city except to shop and eat, but who maybe got their car stolen or impounded for a ticket, and they’ll go right back to work and report just what I was doing at the city police headquarters.

The officer took one more look at Helen, then Casey. “You’re not confessing, are you?” She sounded almost hopeful.

“Not without a priest,” Helen piped up.

Casey ignored her. “I suspect somebody else,” was all she could manage.

A nod, a quick look around the lobby, at nothing at all. “Well, in that case, I’ll do you one better. I’ll get you a Bishop.”

Casey considered herself rightfully frustrated and depressed. She should have known better. She wasn’t really frustrated or depressed until fifteen minutes later when she stepped into the Bishop’s office for the first time. One look at him made the rest of the situation pale in comparison.

Even so, she straightened as much as she could, shoved her mother into a seat, and challenged the officer. “There’s somebody you and I need to talk about.”

“A wicked prescription guaranteed to give you sleepless nights.” ~Nora Roberts

“Eileen Dreyer creates the sort of skin-crawling suspense that will leave readers looking with a wild and wary eye
upon anyone at the other end of a stethoscope.” ~Elizabeth George

“Dreyer…levels a roguish sense of humor at the medical establishment in this entertaining romantic thriller.” Publishers Weekly

“Author Dreyer, herself a trauma nurse, writes an excellent suspense mystery, prescribed to keep you on the edge of your seat.” Corinne, Booked for Murder

Winner of the 1992 RITA® Award from Romance Writers of America®

Other Books in Medical Thriller Series