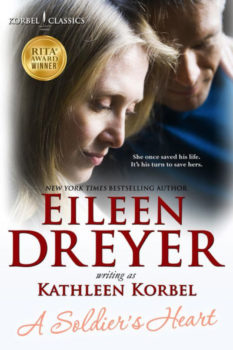 Twenty years ago in an EVAC hospital in Vietnam, Claire Henderson saved Tony Riordan’s life. Now, Claire is the one who needs help. She just doesn’t realize it will involve her heart.

She once saved his life. It’s his turn to save hers.

The choppers appeared just after the sun. The staff at the Ninety-first Evac Hospital at Chu Lai had been expecting the one, hadn’t hoped to see the other. After all, it was monsoon season, and the rains simply didn’t stop. They poured in the windows and shorted out the power supply. They turned the Vietnamese dirt to a river of mud that seeped through sandbags and slid in under doors and caked onto everything they touched. They pummeled the trees and swamped the roads and overwhelmed the senses.

It was the monsoons, and by rights things should have been slow. The NVA never quite saw it that way. And so the choppers still came.

This dawn brought them in flocks, stuttering their way in from the north, from the west and from the south. The sun, breaking through the clouds over the China Sea, glinted gold and crimson on their shivering blades.

On the ground, triage teams waited inside the doors labeled Emergency as long as they could, huddled against the threat of a new downpour, bent with the weight of more casualties. The Quonset huts that lined up behind them on the barren base on the cliffs at the edge of the ocean were already full. Pre-op was full, and the OR was full. The ICUs were standing-room only, and the choppers to take the transfers out that would make room were late.

At the same moment the first dust-off chopper landed, a team ran from the protection of the doors, crouched beneath the blades, their clothing and hair flattened in the rotor wash. Medics and nurses and doctors helped pull litters off the Hueys and settled them onto gurneys for their ride through the maze of evac medicine.

Some of the men were conscious, their faces pinched and small with pain. Some, blood-soaked dressings cocooning heads, lay silent and ominous. None cried out or whimpered as they were moved. One, however, talked. He grabbed the nurse who was checking him and begged for her help.

“My radioman,” he pleaded in a voice that was husky from the wounds to his chest and abdomen and leg. “Get my radioman. I can wait. Get him… he was next to me… please. He’s hurt bad. You get Smitty.”

The nurse gently pried the man’s fingers from her arm and held them in her hand as she assessed his wounds. He was a Marine, she thought, although it made no difference. “It’s okay, Sergeant. Somebody’s taking care of him.”

“No,” he demanded, his voice rising even as the blood soaked the gurney beneath him. “You can save him.”

As she helped roll the gurney into the receiving area, she lifted the soaked, dirty dressing on the soldier’s chest and winced. “How long were you swimming in that rice paddy, Sergeant?” she asked, her voice as gentle as her blue eyes. The soldier never saw the brief flash of horror in her expression at the extent of his injuries. His eyes were bandaged, as well.

“All night,” he answered, his voice dying a little. “We got caught, but I held on to him. Don’t worry about me. Check Smitty. Please… check Smitty for me. I’m not gonna… I’m not gonna make it. You get him.”

The nurse looked up to catch the eye of a medic across the room. He was wheeling another gurney behind the yellow partition. On the gurney lay the sergeant’s friend. The one he’d spent the night protecting in the rice paddy. The friend who was being isolated because he was going to die and there was nothing they could do to help him.

“Is he okay?” the sergeant asked.

The nurse noticed that the sergeant was a big man. Well built, probably an athlete. He had a clean, strong jaw beneath that field bandage, a voice that would probably command men well. A young voice. A voice too young to die.

But then, she imagined, so did the radioman named Smitty who had just disappeared behind the screen that hid those labeled Expectant.

“I can’t see him,” she lied, and turned to her medic, who was in the process of cutting the sergeant’s uniform away. “Hey, Humbug, toss me the blood-drawing equipment. I need another IV in him. And tell Doc Schaeffer he’s gonna need a couple of chest tubes and big antibiotics before we can risk OR.”

The sergeant would lose some of his intestines. He would probably lose his spleen, maybe part of his liver. If he was lucky, he’d end up with both lungs intact after they drained all the blood and air and pus off them from the pseudo-monas infection he’d been breeding in his injuries during the night he’d lain in the paddy water with his friend. If he was lucky, he’d keep his leg, which was already swollen and dark.

That was if he lived. The nurse hadn’t even had a chance to assess his head yet. For some reason, she couldn’t bear to lift that dressing and see what had happened to the rest of that handsome face.

He was wearing a religious medal of some kind on his dog tag chain. Maybe that would help him. She wasn’t sure she could.

His grip was loosening from hers. She let go and grabbed a stethoscope to get his pressure.

He was a strong man. But then, they’d all been strong men when they’d come to this war.

“Oh yes, you are,” she disagreed even when she got a reading of fifty over thirty. “Humbug, get me that IV!” she yelled, snapping a tourniquet around his arm. “Pump in the fluids and get me a couple of units of O neg. And get Schaeffer down here with those chest tubes!”

His voice was fading, just like his blood pressure.

She hit him. Right on the jaw. Just to get his attention. “No, it is not okay, Sergeant. You stay with me, you hear?”

“You’re not dying on me, mister. You hear that? I forfeit points if I lose a sergeant, and I’m behind too many points today as it is.”

He grinned. He actually grinned. “Sorry to… disappoint you… I’m just… tired.”

“You are not dying on me.” She didn’t know why this one mattered suddenly. After all, she’d already been on duty for fourteen hours. She didn’t foresee introducing herself to a bed anytime soon. It was monsoon season, and today that meant mass casualties. She’d been handling one patient after another as long as she could remember, blasted, bleeding bodies that had once been strong and healthy and alive. Silent ghosts that disappeared behind the yellow partition and never came out.

So she couldn’t say why this one fired her up, but he did. “You are not dying on me,” she said even as his blood dripped steadily to the floor, as his fever skyrocketed, as they inserted tube after tube into him and flushed him with antibiotics and more than thirty units of blood. Even after they lost him and brought him back four different times in the OR.

“You hear me?” she demanded to his silent, swathed form as it lay in ICU three days later, racked with the fevers of massive infection. As he woke later to find the extent of his injuries and tried to pull out all those tubes himself in his delirium.

Every day for two weeks, while he tried to slip silently away, she cuffed him on the shoulder, she patted his cheek, she argued with him and pleaded with him and laughed with him. And she kept saying, “You are not going to die on me today, Sergeant.”

And for those two weeks, the sergeant did not die. But then, as the next wave of mass casualties filled the Quonset huts to overflowing and the nurse was taping chest-tube bottles and starting IVs and trying to stay awake into her twentieth hour on duty, the sergeant was rotated out to Japan, and the nurse never knew whether he listened to her or not.