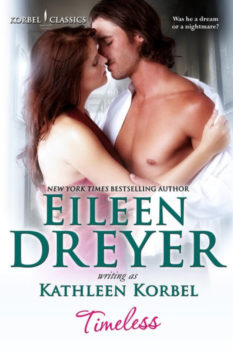 Genevieve Mallory can’t sleep. As odd as it sounds, she thinks her beach house might be haunted. She’s hearing odd sounds and having odder dreams. Then she finds a naked man unconscious on the beach, and her world gets much more frightening.

It was what she dreamed.

Gen had been back at the old house for exactly five days, and for each of those five days—deep in the night, when Gen couldn’t protect herself against the turmoil that had driven her here—she’d had the nightmare.

Each night, hard into the darkness, she’d awakened tear-streaked and sobbing, desperate to blot out the sights and sounds that followed her from sleep. Stunned into shaken silence by emotions she couldn’t remember ever having felt in her waking life. Increasingly obsessed by the irrational conviction that there was something more to the dreams than just the bubbling up of grief and guilt and old terrors.

Each night she woke plagued by the suspicion that something in the old house itself was creating these dreams, something so embedded in the wood and metal and memories that it had finally escaped to torment her. Something that waited for her here, where her grandmother and great-grandmother had watched the sea before her.

Straightening from the old rocker she’d curled herself into, Gen walked out onto the porch. It was going to rain. She could feel it in the gusting sea breeze, could taste it in the humid air. The world around her shuddered and whispered, and the clouds raced in from the sea.

She loved storms. She loved to watch them whip the water into a frenzy and torment the trees. The sky split open and the earth answered, and Gen stood outside on her porch, at her home, on the island that had belonged to her family since before the Civil War, and sang back.

But not tonight. Tonight the storm seemed to have invaded her, as well, stirring her up as much as the ocean beyond her door. Her heart was beating faster, as if she was waiting for something. Her palms were sweating. She couldn’t go out, and she couldn’t stay still.

And she couldn’t go to sleep.

Gen took one more look up into a sky mottled by tumbling clouds and faint moonlight and headed back in to call Annie. It was only eight p.m. on the other coast, and she’d promised. And if there was one thing Gen could pride herself on, it was that she never broke a promise to her daughter. That had been Michael’s specialty.

“I was out walking on the beach.”

Gen could hear the worry in her mother’s voice even before she admitted it. “Are you okay, honey?”

But then, her mother didn’t know the truth. She didn’t realize that after only five months, Gen was finished mourning Michael’s death. Or maybe she’d never mourned at all. She’d lost Michael a long time before the plane crash that had taken his life. Watched helplessly as the man she’d once loved succumbed to the pressure of power and opportunity, inexorably changing into someone she didn’t know anymore. Someone she liked even less.

Just as she had every day since the Georgia State Police appeared at her door, Gen tried to call up Michael’s handsome blond features, the same sharp brown eyes and mesmerizing smile that had been reproduced on Annie to enchanting effect. But Gen couldn’t quite see him anymore. His face was fading, had been fading, and she wished with all her heart she could say she was sorry.

She wasn’t so much. What she was, was afraid. But that wasn’t something she could admit to her mother or her daughter. Her mother had never understood, and her daughter would understand all too well.

“Mommy? Hey, guess what? I got to see some seals today. It was so cool!”

Even with the acid of unease building in her chest, Gen couldn’t help but smile. Annie was her baby, her friend. Her gift from a dying marriage. Nothing was more important in her life than the trust of that little girl, who had lost so much already.

“That’s neat, baby. Are you behaving?”

Gen could imagine the scowl. “Aw, Mom. Gram says we can go horseback riding tomorrow.” A pause now, just like always. “Are you okay?”

Aching now, sharp enough to take her breath. That her little girl should worry about her. Gen wished she could tell someone how she felt. She wished she could explain the conviction that she was being watched in her empty house, that the dreams that plagued her meant something more.

She wished she could explain the fact that when she should be healing, she was becoming obsessed with the sight of a blue-eyed stranger she met only in her sleep.

“I’m really fine, honey. I just needed to get away from all the hassle from Dad’s business. You know.”

Gen closed her eyes, wishing she could dispel the sick sensation. Wishing she understood it better, that she hadn’t handed it on to her little girl, that irrational terror of abandonment.

The answer was quick and sure. “No, Mom. Really. I’m…” Suddenly that little voice was even smaller. “Is it okay if I’m happy I’m here at Gram’s?”

Gen pressed her fingers against aching eyes. “Of course it is, honey. You’ve been planning this trip for a year. I’m glad Gram got to fly back on the same plane as you.”

“I miss you. But I’m really happy that you’re having fun. Besides, you’re only gonna be gone another week. And you know the deal. I’ll call every day before ten. If you need me, call right away and I’ll be on the next plane. Okay?”

And Gen heard the relief. “Yeah.”

It made her want to cry. “We’re gonna get through this, little girl. You and I. Together.”

“Always and forever. And that’s a promise.”

And Dad was gone. Gen felt her stomach cartwheel, felt the sudden urge to look over her shoulder. There in her comfortable, spare house, where generations of O’Shea women had watched the ocean, Gen battled the sudden devastation of abandonment. She talked to her daughter, knew her own mother was no more than a pause away, and yet she couldn’t get past the sudden, certain conviction that she was all alone. She felt like a six-year-old again, desperately searching the crowd in a busy shopping mall, knowing with sick certainty that she’d been left behind.

Outside, the wind began to whine. One of the big old live oaks that backed the house scratched on the wall in protest. The ocean grumbled. Gen squeezed her eyes shut, terrified. Shaken. Dreading the end of the call, when she would have to face her own failings again. When a strange dream would begin to whisper at the edge of the shadows.

“How many days, Annie?” she asked, because she couldn’t really answer her daughter any more than her mother had been able to answer her when her own father died.

It took Annie a second, but she answered. “Seven, Mom. And if you want me home, I’ll come right away.”

“Thanks, sweetheart. Now let me talk to Gram.”

Her mother returned, sounding just as brisk and pragmatic as always. “Have you had any luck straightening out Michael’s affairs?”

Gen sighed. “No. That’s one reason I escaped. He left things in a real mess. I’ve been talking to everybody from his lawyer to the bank examiners, and they can’t straighten out his records.”

“Well, they’ll probably get everything tied up while you’re gone. You just rest and take care of yourself.”

“I never wanted this to happen to you, honey. Never.”

Gen couldn’t think of anything to say. Her mother’s voice was suddenly so intense, so abrupt, as if there was so much more to say that she couldn’t manage. For a moment Gen wondered if her mother remembered all her old fears after all.

“Did we have anybody in the family in the Civil War?”

Gen heard the surf and imagined it on the other end of the line. “Why ever would you ask a question like that?”

Gen lied. “Oh, I don’t know. I read something. About the Battle of the Wilderness, I think. Does it ring a bell?”

Another silence. “Don’t think so.”

Her mother had never been much for family history. Gen knew less about her own grandmother than about the Renaissance artists she’d studied in college. But she had to ask. She had to know before she slipped back into the dream, that same damn dream that had plagued her every night she slept under the roof of O’Shea’s Seven Oaks.

She had to have an answer to the question of why she didn’t grieve more for her own husband than she did for a man she’d never met, who lived only in her imagination.

They talked for a while longer, but Gen could keep her mother on the line for only so long. So she signed off and hung up, and looked around at the house she’d fought to save.

Silence. Such a comfort, usually, an isolation that countered the intensity of her job as a securities broker. Old, worn walls that had withstood everything from hurricanes to negligence. A potpourri of furniture left by succeeding generations. History.

Maybe too much history. Maybe that was what was plaguing her. She’d had the dream when she’d come here before, but only occasionally. Not every night. Not following her into the day, nudging at her during phone calls and walks on the beach, as if the fantasy was more warning than escape. As if it was a portent.

Gen shook her head. That was ridiculous. She was a businesswoman, not a fortune-teller. She’d rescued the house from family indifference for the escape, for the wonderful soothing comfort of the sea. Not because it had any special meaning or message for her.

Certainly not because it had any kind of ghost to commune with.

Even so, it took her two glasses of wine to get up the nerve to go to sleep. Outside the wind notched up another key, and the grass sang like a violin section. Far in the distance, thunder muttered and the ocean answered. The house groaned, as if it resented the newest onslaught. Gen pulled up the covers and tried her best to relax.