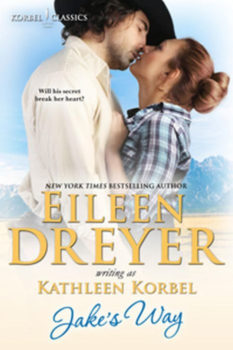 Everybody knows Jake Kendall. Jake is a success story. Orphaned early, he did such a good job turning around a failing Wyoming horse ranch, he put his three siblings through school and gained a nationwide reputation.

Amanda Marlow is the epitome of an east coast author: bright, funny, curious. When she shows up at a cabin on Jake’s land to research a book, she threatens Jake’s entire world. She represents everything he longs for: freedom, exploration, learning. But Jake has a secret that could bring his entire life tumbling down. And if he lets Amanda close, she could expose it.

It was setting up to be a good day. The cold had finally broken in the Wyoming mountains, leaving the morning air soft and the sky pale. Clouds hid the jagged edges of the mountain peaks, and mist shrouded the high plain. The air was full of birds and the rivers swollen with snowmelt. Jake Kendall had waited out the whole winter for a day like this.

He didn’t bother reining his horse. Buck knew the way through the high meadows better than any man. The big black animal carried Jake at an easy canter toward the stand of aspens and cottonwood that bordered the gurgling stream. Jake didn’t need to be this far up. His horses weren’t going to need the meadow for a while yet, and Jake never had time to hunt game. But Jake had waited out the snow again this year, pacing the house like a caged animal, and it was time to get out. The winter told him too strongly what he wasn’t. The spring reminded him what he was.

They had almost reached the old place, when Buck’s ears flicked forward. Jake’s attention had been on the shadow of an elk he’d just spotted on the other side of the river. He felt Buck’s hesitation and swung around, the saddle creaking beneath him. And he saw what his horse had seen before him.

“Damn it,” he swore, pulling the horse to a sudden stop. “Not again.”

Buck lifted his head and waited, dead still beneath his rider. After all these years, Jake didn’t even notice. Buck had been the first horse he’d trained, fifteen years ago. By now, the two were like separate parts of a whole rather than man and animal. And both of them had their undivided attention on the stand of trees.

A car. Tucked into the snow shadows that still hid the cabin from sight. Jake would have had to ride another two or three minutes yet to see the corner of the roof beneath the branches, so well had his great-grandfather situated it. But red cars just didn’t blend well in the snow.

“I’m gonna have to close off that access road,” he snarled, urging Buck forward with no more than a twitch of his thighs.

Jake wasn’t in the mood for interlopers—not on his land, not on his time, and not on his spring morning. Some strayed hunter or dude-ranch visitor was about to find out just what happened when he broke into the wrong cabin. Jake was ready for a fight.

He wasn’t at all ready for what he found.

She was standing in the doorway. Jake saw her hair first, the color of a blood bay. The sun seemed to snake through all the bare tree limbs just to set fire to where it tumbled around her shoulders. She was holding a cup of coffee and had her face lifted to the sight of the clouds that still swirled around the snowcapped peaks. Her eyes seemed to be the first green of the season.

Jake had never been struck dumb by a woman. He’d never had the time, and certainly had known better than to give in to inclination, especially the way his life had gone. He was struck dumb now.

She was small, probably no bigger than his little sister, five-three or so. But she had the kind of grace a man only dreamed about, a quiet poise that looked out of place here. She should have been at the front door of a hotel or restaurant, not a hundred-year-old settler’s cabin in the middle of nowhere. She even wore the wrong clothes. Tailored, of tweed and corduroy, as if she thought she were at an English estate for a shooting weekend.

Then she turned those eyes on Jake, and he let Buck falter to an uncertain halt.

Even her voice was cultured. Soft and deep, nudging something deep in him he didn’t want nudged. Ruining the morning he’d wanted by doing nothing more than standing there.

Jake battled a flash of anger as he swung from the saddle. “This is private property,” he snapped, his expression hard.

She was elegant and classy, but that didn’t make a difference. Or, more truthfully, it did. Which was why he wanted her gone.

She smiled at him. “I know,” she admitted with a vague motion of her coffee cup. “I was hoping to get over to see Mr. Kendall this morning.”

“You just did.” When Jake Kendall wanted to stare a man down, he tilted his hat down, just a little, so the shadow fell over his eyes. He did that now. “Now, what are you doing here?”

She went very still for a minute. An answer seemed to depend on her finishing the coffee in her cup, so she did it. Jake did his best to keep his eyes from the way her throat worked. It was a classy throat, white and soft and slender.

But that didn’t matter.

“You’re Jake?” she asked, and he dragged his gaze back to those big eyes of hers.

“I’m Jake Kendall, and you’re on the Diamond K Ranch. The cabin is not for rent, and this isn’t a dude ranch. Try Jackson Hole. I’m sure there are a few open this early.”

She was shaking her head even before he’d finished, making her hair dance and sway. “No, you don’t understand. Lee sent me.”

Jake had thought the day couldn’t get worse. “What?”

She nodded this time. “She said she’d written to you to let you know I was coming. She gave me a key to the cabin and said that you wouldn’t mind. I’m here to write a book.”

Lee. Damn it, anyway. He’d been trying to curb his little sister’s enthusiasm since her third birthday when she’d invited the entire town of Lost Ridge to the ranch for a barbecue. He’d survived wounded animals, heartsick girlfriends, an entire high school football team with no place to go for a homecoming party and any number of lost souls looking for work. He’d actually been counting on some peace and quiet now that she had gone east to school.

“You don’t exactly look like one of her classmates,” he retorted without any noticeable warmth.

“I’m not,” she allowed with another of those friendly smiles that could kick a man right in the gut. “I’m a teacher. She was in my creative writing seminar this fall, and we got to be friends. I know she said she wrote you about it. My name’s Amanda Marlow. When I told her I needed to do some research on western folklore and history for my next book, she suggested hiding out at the Diamond K.” For a moment, her attention wavered toward the vista beyond the trees. “She didn’t mention that this was just about the most beautiful place on earth.”

The teacher. Jake remembered now, the nonstop talk around the holiday table about Lee’s latest mentor, the award-winning author who seemed to understand all Lee’s babble about plots and themes and symbolism. The Hollywood-bound wonder woman who could make little Lee’s eyes glow like hot rocks and made Jake feel left out and alone, even with Lee.

“It’s also a place without a phone and with electricity that isn’t very reliable,” Jake warned. “And a bathroom with a half-moon on the door.”

“I know.” She grinned. “I got the chance to walk through the snow in my nightgown and boots last night. Quite an experience.”

Jake desperately searched for another alternative. Anything rather than leave this woman on his property.

“Uh, would you like to come in?” she asked now, lifting her hand in a stiff movement toward the interior of the cabin. Then she smiled. “I feel a little silly inviting you into your own cabin. But I was going to talk to you, anyway, about interviewing the hands.”

Jake stiffened. “I have to get back to the ranch. Write what you want, but it’s foaling season. Don’t interfere with the working of the ranch.”

On the porch, Amanda Marlow took a step closer, her gleaming boots clacking on the old wood. “Oh, I wouldn’t interfere. Lee said she thought you wouldn’t mind.”

“Well, I would. You want to rough it, that’s your business. Any problems, let Betty Engleman know. She’s my secretary at the ranch.”

With that, Jake turned on his heel to where Buck waited in perfect silence.

But Jake was already swinging back up into the saddle, the bridle jangling and the leather creaking comfortably under his weight. Buck shifted a little and ducked his head. Familiar feelings, comfortable smells, a horse and leather and wool. Miss Marlow was the interloper here, the stranger. And yet Jake was the one who felt uncomfortable. He didn’t say another word before spurring Buck into a hard gallop back across the meadow.