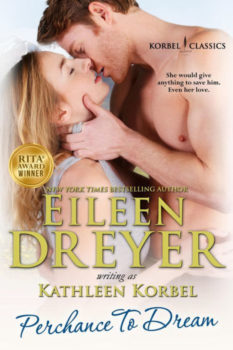 She would give anything to save him. Even her love…

Top Agent Jason Mitchell has nightmares. His partner is dead, and he knows it’s his fault. Lindsey McDonough refuses to let him destroy himself. So she seeks him out at his mountain cabin. What she doesn’t know is that the man who killed Mitchell’s partner has followed her.

Winner of the RWA RITA Award! This is a story of passion, desperation and danger.

“There’s no way to put this book down” RT Bookclub

Look up. See what’s waiting for you.

He looked up, his head back so far he was afraid he would fall, even though he was standing on the ground. He saw.

A great skeleton consumed the night. Black on black, geometric bones set one upon the other, this was a beast that could challenge the sky. A storm stalked the beast’s heels. Gathering its strength from the mountains beyond, it flickered across the roiling clouds at the skeleton’s head and swirled through the debris at its feet. Thunder muttered at its edges.

He stood below, eyes to the top, to where lightning lanced through parallels that lit like hollow eye sockets. To where the beast waited. Beckoning, threatening.

It was so high. A person could fall to his death from its heights.

A building, you idiot, he thought, already sweating. It’s nothing more than a forty-story frame, and you have to get your rear end up there.

The skeleton summoned with the whisper of approaching thunder. The night watched. He saw that the elevator waited for him. Still he hesitated, his heart hammering. The wind plucked impatiently at his hair, picked through his clothes. A newspaper tumbled across the hard dirt and slapped against his pants leg. He didn’t notice.

Mitchell knew it was his job to follow the men who had just climbed to their clandestine meeting. He just didn’t realize when they’d told him the address that the building had already grown. He envisioned an empty lot and followed willingly. Now he watched his worst nightmare loom in the dark.

He didn’t remember moving. He didn’t know that he’d stopped staring at the building’s height. Suddenly, though, he stood in the cage, the mesh cold against his slick fingers. The skeleton still waited, high, lethal. It seemed to chuckle in anticipation. But there wasn’t anyone else to go up. Maggie wasn’t there yet. She would have gone up instead, leaving Mitchell in peace on the ground, but she was too late. He had to climb into space in that open cage.

He could see the button, red against the yellow mesh. He hit it, and the car jerked upward. Weaving his fingers into the metal grid work, he locked his jaw against the nausea. He couldn’t close his eyes. He had to be ready. He had to see what was happening. But he couldn’t watch the earth fall away from him, either, because he knew he would fall away with it.

One story, ten, twenty. The floors passed in mute succession, mocking him with the emptiness of their edges. He struggled to keep his eyes level, to ignore the wind that tugged at him for attention. Sweat collected beneath his arms and trickled down his back. He didn’t notice. If he looked away, he would fall. He would tumble into space, over and over until the ground rushed up and struck him like a clap of thunder.

He kept his eyes on the passing concrete, looking for signs of life, trying his damnedest to ignore the gravity that pulled ever harder at him.The altitude clawed at him, twirled him so he couldn’t find his balance. But there was something else. Some thing… prescient. There was a gnawing in his chest, a rat trying to get out. Something he knew, but couldn’t remember. Something that was about to happen.

He found them at the top. They were shadows beyond the illumination of a single bulb, their movements jerky in the shudders of lightning. Thirty-nine floors into space. Thunder reverberated around them. The wind howled. The storm shook the floor in a hollow rush of wind and rain. Beyond, the city winked in silence.

There had been two going up. Now he spotted four. The man they were going to meet had already arrived. If only Maggie had made it, they could have nailed them all together. She could have witnessed the deal and they both could have put them out of action back on the ground—or trapped them all together in the sky until the reinforcements came. Alone, he was useless. He could only watch, the fire in his chest closing off speech and watering his eyes.

I’m acrophobic, Maggie. Only you and I and the boss know that. I can’t go above the third floor without bringing up my lunch. I’m not going to bore you with explanations. You just have to know that when it comes to any high stuff, that’s yours. I can handle the rest.

We’re not the ski patrol, Mitchell. I don’t think it’s a problem to worry about.

It is now. Where the hell are you, Maggie?

They’re fighting. Yelling and shoving. He should get out there. Stop them. They’ve dragged someone to the edge of the floor. It looks as if they’re getting ready to throw him off. There can’t be a worse fate.

The car shuddered to a stop and he tried to drag in a lungful of storm-tossed air. Get over there. Stop them. They’re screaming at him, but the words aren’t clear. The thunder was too close, the air too thin. He strained against the paralysis, his hands talons around the protective mesh, the wind snaking around him with cold fingers. Go out there and stop what’s going to happen. The rat worried at him, too, his teeth sharper, his bite quick. You can stop it. You can prevent it, just this once.

He never knew how close he was to moving. The lightning struck first. A sharp, pronged slash of it, so close he could hear the sizzle, smell the ozone as it flooded the concrete and steel space with a fearsome blue-white light that froze time.

He saw them then. All of them.

How could she be here? How had she made it ahead of him? His hand came away from the cage. He lunged with a terrible cry…

It was Maggie, balanced at the edge of her life, bowed at the brink of the storm. Mitchell saw her and his heart died. He saw her face, her beautiful young face that had never betrayed fear, and she knew. She knew he was there. He understood, because the last he saw of her, she reached out her hand. She reached out to him.

To him. And he could never get to her in time.

His heart clamored. His chest was on fire. Coming bolt upright in bed, Jason Mitchell screamed at the end of the dream. The end of his memory. The beginning of his nightmare.