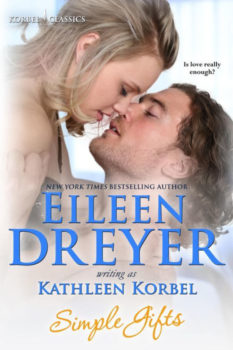 Rock O’Connor is a burned-out cop who doesn’t have time for perky artistic types without sense. Lee Kendall would much rather she never had to deal with him. But when she’s hit by a car, she finds herself being stalked by criminals who want something she has. She never expects that in an attempt to save her life, she loses her heart.

If Lee tried really hard, she could almost pretend that the skyline of Chicago was a range of mountains. Abrupt, angular, powerful, the buildings reared from the shores of Lake Michigan like a great geologic upheaval at the edge of the plains. Metal and glass instead of rock and dirt, cars instead of cattle. The battering cacophony of humanity instead of the susurrous silence of firs.

Okay, so it wasn’t Wyoming. Nothing was. But there were days like today, when Lee could almost like Chicago. The sun was so bright it hurt Lee’s eyes as it winked off a million windows like shards of a broken mirror. The wind scurried among the buildings and tangled in Lee’s hair to send it flying. And the people! Lee could just sit right down here on the sidewalk and watch the—

Lee stopped, just in time. She hadn’t even seen the traffic. With a chagrined smile for her companion, who had yanked her to a stop within inches of disaster, she pulled her foot back onto the sidewalk and let the BMW that had blared at her scoot on past.

It even took Lee a minute to remember exactly where they were. She’d been so wrapped up in the beautiful day that she’d let almost twenty blocks go by unnoticed.

“I’m not so sure I should go home,” Sierra groused from alongside, her fingers still firmly wound around the strap of Lee’s shoulder purse. “The play isn’t for three more weeks, and already you’re in the ozone.”

Sierra made it a point to look around to include the movement, the noise, the neon and traffic on this bright, warm afternoon. When she turned back to Lee, her soft green eyes were as dry as dust. “Uh-huh. Home. Sure looks like a horse farm to me.”

Lee laughed. Sierra was part of the magic of the city. Variety, sass. Color and life. Sierra had skin like chocolate and eyes the color of pale Depression glass. Except for Lee’s big sister, Gen, Sierra was Lee’s best friend in a place spilling over with new people to meet. After the isolation of a mountain meadow in Wyoming, it was quite a feast. “Imagination, Sierra. You should try it sometime.”

“Thanks, girl. It’s all I can do to keep track of yours.”

Alongside them, the light turned and the Walk sign came on. Neither paid attention. This was where Sierra turned off, walking on to the El stop that would take her home. Lee just needed to head right up LaSalle to Oak and the Memorial Medical Center where she was going to meet her sister, who was due to get off from her shift as senior pediatric resident.

“You do remember where you’re going, don’t you?” Sierra asked.

Lee gave her a three-point scowl. “I was caught up in the moment, Sierra. Not missing in action. I’ll be fine. And thanks for coming along today.”

Her friend gave a little wave of her hand, part impatience, part affection. “Shoot, girl. Nobody from my neighborhood gets to go sailin’ with the rich folk. I don’ mind walkin’ you home, if that’s the price.”

“Thanks,” Lee complained. “Now I feel like a six-year-old on a field trip.”

“Some field trip. Sequins and champagne last night and sailcloth and gin today.” Sierra flashed a sudden grin. “Who says a girl should starve for her art, anyway?”

“A highly overrated notion, to be sure.”

Both lifted pinkies in identical salute to the patrons who supported not only their burgeoning careers, but their waistlines as well.

They said their goodbyes. Sierra watched the light, waited with the crowd and headed across, her thick hair shifting with the movement, her grunge jeans and boots making the short woman look more like a boot-camp attendee than an up-and-coming theatrical director.

Lee watched her go. She watched the people on this waning afternoon, locals on the move with heads down and arms full, dodging the tourists with heads back to marvel at the tallest buildings that clustered together in a tight forest just south of the Chicago River. A block away an ambulance wove its way through traffic toward Gen’s hospital, its lights strobing, its siren an indignant howl of protest. To the south, clouds piled up in soft white rows that dappled the streets with shade.

Lee remembered how this had all looked like a cubist painting when she’d photographed it from the deck of the sailboat she and Sierra had walked off about twenty blocks earlier. A multichromatic work of art. Life Descending the Street.

It was a perfect day. Lee smiled and stepped off the sidewalk.

Someone cried out a warning.

Lee’s first thought was that she’d missed the light. For some reason, that was what she checked first.

Nope, it said Walk. She was okay. So she turned, just to be sure. She checked the traffic that was heading toward her on the one-way street. It was safely tucked behind a red light across LaSalle. She didn’t see the problem.

She didn’t see the problem, because the car that hit her struck from the opposite direction.